How to Take an Exam… and Remake the World

Bertell Ollman, How to Take an Exam… and Remake the World. Montréal: Black Rose Books, 2001.

I’ve recently been embroiled in a collective anguishing over the exam and homework strategies of a 16 year-old scholar. And with no hope of a quick resolution: it seems that college, unfortunately, can be the extension of high school by similar means.

In his continuing effort not only to say important things but to actually communicate them to a new audience, Bertell Ollman has set out to deal with the hyper-corporatization of education. The book proceeds from an outrageously simple, yet simply outrageous premise: I’m going to tell you a story you don’t want to read, and you are going to read it because it has something you do want hidden in it. It’s a carrot and stick, bitter and sweet approach: You want to know how to ace a test; I’m going to tell you that tests suck.  And that if you pass, you’ll face a lifetime of working for test-designers who will surely test your patience with the meaninglessness of their (and your) pursuits.

Exams, says Ollman, are “the treadmill that prepares [students] for the still bigger rat race to come…the drug that so befogs students’ minds that they take this mad scene for normal.” Furthermore, “an exam is not the ideal occasion for laying out one’s world view.”  That in itself should convince us there’s something wrong with exams. And something right with them from the point of view of the exam masters:  they are, in fact, an ideal occasion for laying out someone else’s world view, the one you’ve been taught. The fragmented, incoherent, uncritical world view that’s dished out in (and out of) school in order to replicate an order already existing. More often they are the occasion for regurgitating the incoherent fragments themselves, with world view obscured by the obligatory absence of critical thinking.

Ollman pursues his point with a text rich in both startling statistics and pithy quotes, along with cartoons and song lyrics, all well suited to today’s sound-bite consciousness.   Quotes about schools like Mark Twain’s “I have never let my schooling interfere with my education.” And quotes about capitalism like Adam Smith’s “Civil government…is in reality instituted for the defense of the rich against the poor.” “These capitalists,” explains Abraham Lincoln, “generally act, harmoniously and in concert, to fleece the people.” “The truth is,” adds Woodrow Wilson, “we are all caught up in a great economic system which is heartless.”

And statistics!: “Since 1947, the world has spent over $15 trillion on arms… 1/2 of it (or just the amount spent by the U.S.) would be enough to industrialize the entire third world up to the level of France.” This sort of perspective ought to come as rather a jolt to students if they stop to think of how many other such things they have not been taught, and how irrelevant these most relevant things prove to be, come test time.

And Ollman continues to invent games, following up on his famous board game Class Struggle with Bullshit Bingo.  He undertakes an elucidation of class struggle, sketching an outline of Marxist theory including alienation, commodification, and surplus value. He then provides a portrayal of socialism, its values, forms and practices, even down to the details of what should or shouldn’t be publicly owned.

He also encourages the reader to practice the unusual but essential skill of thinking about things from two perspectives at once, or nearly at once. He urges students to develop both the skills to survive in the system and the skills for struggling to change it.  It’s very smart. It’s an anti-capitalist reference book. Yet it starts from where so many young people are – consumerist and survivalist. For this reason it should be appreciated by both the most and least activist of today’s students.

By the way, his test-taking tips are excellent, even principled.  Thanks to Ollman for that.

And thanks to the folks at Black Rose Books for bringing us this handy, enjoyable tool.  One thing though: get a proofreader.  The frequency of dangling participles, spelling glitches and typos should disconcert anyone even casually cognizant of grammar or punctuation. In a book written by a professor, for students, these are particularly embarrassing. Otherwise, kudos.  And a word to students: don’t leave this book to the last minute. Cramming, as Ollman points out in a burst of traditionalism, isn’t really learning.  But then, neither are exams. 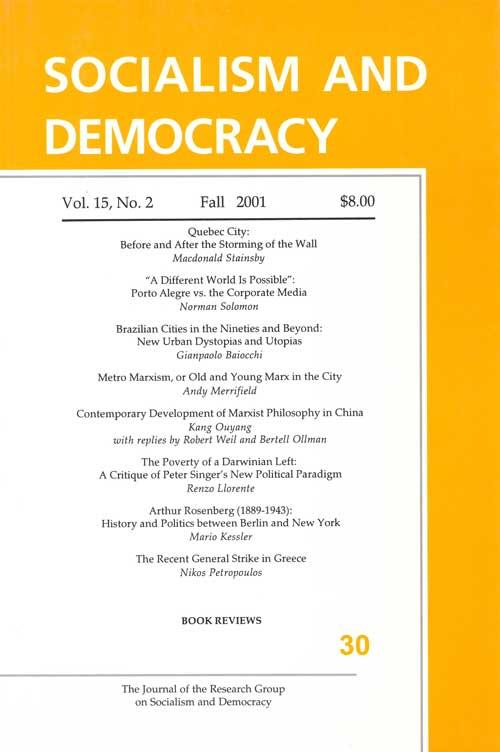