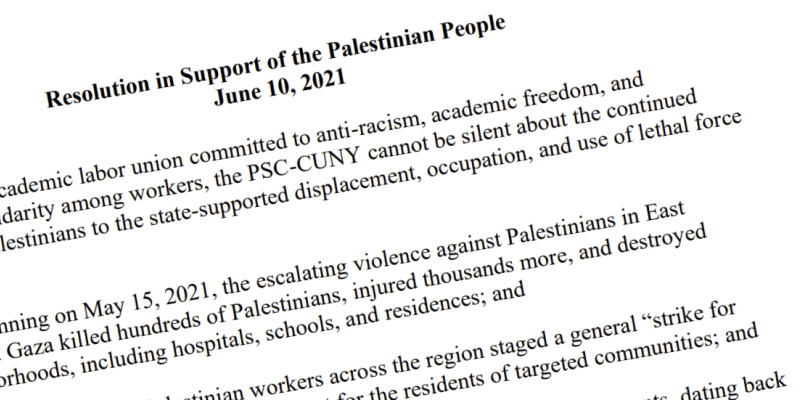 On June 10th, the Deputy Assembly of the Professional Staff Congress, which represents the City of the University of New York’s professional staff, passed a resolution that supported the Palestinian people’s rights and in so doing condemned Israel’s depredations against the Palestinian people. This far-reaching call represents an exemplary act of international solidarity. Loud and clear, this it unites us to the Palestinian people’s courageous defense of their lands, their homes, their families, their dignity, and their culture—religious and secular. The PSC resolution commits its members to struggle for the Palestinians human rights censured Israel’s atrocious behavior toward Palestinian men, women, and children. While the PSC resolution strikes a heavy blow against Israel’s inhumane actions and encourages Palestinians to continue their struggle until justice is attained, it does not go nearly far enough.

Since 1948, when Israel declared its independence, every conflict—win or lose—has resulted in Israel’s expansion and the Palestinians’ displacement. This pattern continues unabated. Within days of the May 20th ceasefire, the Israeli Defense Force had overseen three demolitions of Palestinian homes and one business in East Jerusalem. Even more distressing was the massive march approaching Jerusalem’s Palestinian Quarter, that annually celebrates Israel’s de facto annexation of East Jeruselem, the bespoke capital of its yet-to-be capitol. The delirious demonstrators repeatedly shouted: “Death to the Arabs”; “Burn Their Villages.” In this short period, settlers began reoccupying a hilltop in the West Bank where they intend to build a religious school, thereby adding yet another illegal settlement to the 175 already occupied illegal settlements and great expanses of adequately watered, arable lands adjacent to the Jordan River.  In short, the Israelis had resumed the exact same actions that had ignited the horrendous eleven-day outbreak.

This outrageous attack, the fifth bombardment of Gaza since 2006, led to 240 Palestinian deaths (including 63 children), left seventy-thousand people homeless, as well as causing a massive destruction of its water, electric, educational, and medical systems. The psychic damage to Gaza’s residents—and especially its children—is immeasurable. The Israeli casualties amounted to 12 deaths. Disproportionate numbers of casualties, on that scale, is evidence of war crimes: These figures are proof-positive of the use of excessive force.

On a daily basis, Palestinians living on the West Bank face are confronted with Israel’s aggression. These hostile acts can be grouped into three major categories: the Israeli settlers’ movement ceaseless occupation of Palestinian land; the construction of roads that crisscross the West Band that are reserved solely for Israelis; and the establishment of checkpoints along the roads leading up to and next to Israel’s border. The specifics of Israel’s actions against Palestinians are most disturbing. Settlers enter fields surrounding Palestinian villages and pull from the ground olive trees and other vegetation; the frequency of the checkpoints and the great lengths of time Palestinians must wait lead to the spoiling of food stuffs and the death of poultry. And then there is the construction a massive wall that did not so much separate the West Bank from Jeruselem and Israel as it sliced off 20 percent of the West Bank to the advantage of Israel.

These disgraceful acts are intended to weaken what is left of an economy and civic society upon which, along with East Jerusalem and Gaza were intended to comprise the land upon which the Palestinian state would be built. In their stead, we find huge numbers of settlers, many of whom are immigrants, who systematically replace their indigenous population.

Despite numerous United Nations resolutions demanding this outcome, Israel has neither given Palestinians the right to return to their homes nor received compensation for their property and personal belongings, which were Israelis forced their evacuation in 1948. For this alone, Palestinians refer to Israeli Independence Day “The Nakba” (The Nightmare).

Gaza’s two-million residents, who have no exit whatsoever from their misery, and the West Bank’s Palestinians’ daily humiliations and victimization have not broken their spirit. The Palestinians have maintained their dignity, decency, and solidarity in ways that are inspiration to us all.

The members of the Professional Staff Congress can redeem their pledge, as stated in its Delegate Assembly resolution by reaching out to CUNY students and alumni to join in a mass movement to force our country to cease financing Israel’s suppression of Palestinian rights.