Brandon Alston is a PhD Candidate in the Department of Sociology at Northwestern University. He received his bachelor’s degrees in Sociology and Religion from Haverford College and a master’s degree in Management from Wake Forest University. His current research examines the cultural foundations of surveillance practices that are reflect and reify the production and elaboration of racialized, classed, gendered, and sexualized norms. brandonalston2020@u.northwestern.edu

Whitney Battle-Baptiste is an Associate Professor in the Department of Anthropology and Director of the W.E.B. Du Bois Center at UMass Amherst. Battle-Baptiste sees herself as a scholar and activist who sees the classroom and the campus as a space to engage contemporary issues with a sensibility of the past. Her research is focused on the intersection of race, gender, class and sexuality through an archaeological lens.  She has conducted archaeological investigations in the US South, Northeast, and the Caribbean. Her first book, Black Feminist Archaeology (Left Coast Press, 2011) outlines the basic tenets of Black feminist thought and research for archaeologists and shows how it can be used to improve contemporary historical archaeology as a whole. Her most recent work is an edited volume co-authored with Dr. Britt Rusert, W.E.B. Du Bois’s Data Portraits: Visualizing Black America (Princeton Architectural Press, 2018). wbbaptiste@anthro.umass.edu

Tara Betts is the author of Break the Habit, Arc & Hue, and the forthcoming Refuse to Disappear. She’s co-editor of The Beiging of America: Personal Narratives about Being Mixed Race in the 21st Century and editor of the critical edition of Philippa Duke Schuyler’s memoir Adventures in Black and White. In addition to her work as a teaching artist and mentor to young poets, she’s taught at Rutgers University, University of Illinois-Chicago, and Chicago State University’s MFA Program. tarabetts@aol.com

Charisse Burden-Stelly is an Assistant Professor and Mellon Faculty Fellow of Africana Studies and Political Science at Carleton College. She is a scholar of twentieth-century Black radicalism, political theory, political economy, and intellectual history. Her co-authored manuscript with Gerald Horne, W.E.B. Du Bois: A Life in American History, will be published with Greenwood Press in 2019. cburden@carleton.edu

Edward Carson is Dean of Multicultural Education at The Governor’s Academy. He received his B.A. in History and M.Ed. in History Education from Harding University. His current research examines race, religion, and society, particularly that of W.E.B. Du Bois. He does editorial work for The Christian Century Magazine Then and Now, and sits on the Christian Scholars’ Conference Committee. He is the co-author with John P. Irish of Historical Thinking Skills: A Workbook for European History. He is currently working on a book titled W.E.B. Du Bois’s Editorial Influence on Western Negro Migration. Carson chairs the Communist Party USA’s Boston chapter. professorblog@gmail.com

Carlton Floyd is Associate Professor of English, Affiliated Faculty in Ethnic Studies, and Women’s and Gender Studies, at the University of San Diego (USD).  He was formerly the Associate Provost of Inclusion and Diversity and the Co-founding Director of the Center for Inclusion and Diversity at USD.  His interests include African American and Interracial Literatures and Cultures, Cultural Studies, Metaphor, Myth, and Migration. His publications include works on August Wilson, Equity for African Americans in Education, and on the implications of metaphors in current social and political situations. cfloyd@sandiego.edu

Yunxiang Gao is associate professor of history at Ryerson University. Her research focuses primarily on trans-Pacific cultural history. She authored Sporting Gender: Women Athletes and Celebrity-Making during China’s National Crisis, 1931-1945 (University of British Columbia Press, 2013) and has published articles in The Du Bois Review, Gender and History, The Journal of American East-Asian Relations, Modern Chinese Literature and Culture, and Sport in Society. Several of her articles have been translated into Chinese. She is completing Arise Africa! Roar China!: Sino-African-American Citizens of the World in the Twentieth Century, a book that combines the study of black internationalism with a Chinese trans-Pacific narrative. It unpacks the close relationships between W.E.B. Du Bois, Paul Robeson, and Langston Hughes, and a trio of little–known Chinese/Afro-Chinese, journalist and musician Liu Liangmo, actor and writer Wang Yung, and Sino-Caribbean modern dancer Sylvia Si-lan Chen. y1gao@arts.ryerson.ca

Curtis Haynes Jr. is an Associate Professor of Economics at Buffalo State College, a former City of Buffalo Council Member, and the Director of the Center for Economics and Education. Haynes received a Ph. D. in economics at the University of Massachusetts Amherst in 1993. He has worked on bringing theoretical training and teaching method in line with participatory and applied research. As a researcher, Haynes was a co-founder of the Resurgent City Center—a HUD-funded Community Outreach Partnership Center dedicated to community revitalization. As councilmember, Haynes represented the Ellicott District, one of the most racially, ethnically and economically diverse Council Districts in the city of Buffalo. His contribution had significant impact on the growth of the downtown Medical Corridor and Canal Side revitalization. Haynes is an internationally known scholar in the areas of black political economy and cooperative economics. haynesc@buffalostate.edu

Gerald Horne is the John J. and Rebecca Moores Chair of History and African American Studies at the University of Houston. His research addresses racism, labor, white supremacy, black radicalism, black internationalism, civil rights, and film. He is the author of more than thirty books including Race Woman: The Lives of Shirley Graham Du Bois (NYU Press, 2000) and most recently Facing the Rise Sun: African Americans, Japan, and the Rise of Afro-Asian Solidarity (NYU Press, 2018). ghorne@alumni.princeton.edu

Lasana D. Kazembe is an Assistant Professor at Indiana University-Indianapolis (IUPUI) where he holds dual appointments in the School of Education (Department of Teacher Education, Curriculum, and Foundations) and in the Department of Africana Studies. He is a published poet, educational consultant, and scholar of the Black Arts Movement, Global Black Arts Traditions, and the Black Radical Tradition in Education. His latest (edited) book is Keeping Peace: Reflections on Life, Legacy, Commitment, and Struggle (Third World Press Foundation, 2018). lkazembe@iu.edu

Denise Lynn is Associate Professor of History and Director of Gender Studies at the University of Southern Indiana in Evansville, Indiana. She writes a monthly blog for Black Perspectives, a publication of the African American Intellectual History Society. Her research focuses on gender and race in the American Communist Party during the Popular Front and Cold War. Dr. Lynn is currently completing a manuscript on the 1937 disappearance of American spy Juliet Stuart Poyntz. dmlynn1@usi.edu

Lisa J. McLeod, J.D., Ph.D., is Professor of Philosophy at Guilford College in Greensboro, North Carolina. She teaches in the Women's, Gender, and Sexuality Program as well as the African and African-American Studies Program. She has written on Du Bois’s conception of whiteness, as well as his unpublished manuscript on democracy and socialism; she also works on questions regarding incarceration in the U.S. lmcleod@guilford.edu

Thomas Meagher is a visiting assistant professor at Quinnipiac University. He earned his doctorate in philosophy at the University of Connecticut, where he completed his dissertation, “Maturity in a Human World: A Philosophical Study.” His research centers on Africana philosophy, social and political philosophy, existentialism, and phenomenology. meagher.tom@gmail.com

Jesse Olsavsky is a PhD student at the University of Pittsburgh. He is currently writing a dissertation titled “‘Fire and Sword Will Do More Good’: Fugitives, Vigilance Committees, and the Making of Revolutionary Abolitionism, 1835–1859.” This work examines how the self-defense organizations, known as vigilance committees, aided thousands of runaway slaves, and how those runways, in turn, taught and radicalized the movement to overthrow slavery in the United States. Jesse has published articles and reviews in such journals as Slavery and Abolition, The Black Scholar, and The International Review of Social History. olsavskyjesse@gmail.com

Tom Reifer is Professor and Chair of Sociology, Affiliated Faculty in Ethnic Studies, and Women & Gender Studies, at the University of San Diego; Associate Fellow at the Transnational Institute, a worldwide fellowship of committed scholar-activists, and was formerly a Research Associate at Focus on the Global South (Asia) and the Fernand Braudel Center for the Study of Economies, Historical Systems and Civilizations (SUNY Binghamton). Dr. Reifer has published widely on global social change, and struggles for education for liberation and social transformation, is a Freedom Writers Teacher, and works closely with the Freedom Writers Foundation in Long Beach, California. reifer@sandiego.edu

Phillip Luke Sinitiere is a W.E.B. Du Bois Visiting Scholar at the University of Massachusetts Amherst in 2018-19. He is also Professor of History at the College of Biblical Studies, a predominately African American school located in Houston’s Mahatma Gandhi District. His Du Bois scholarship includes Protest and Propaganda: W.E.B. Du Bois, The Crisis, and American History (University of Missouri Press, 2014), and essays “Of Faith and Fiction: Teaching W.E.B. Du Bois and Religion” (2012), “Leadership for Democracy and Peace: W.E.B. Du Bois’s Legacy as a Pan-African Intellectual” (2014), and “‘Outline of Report on Economic Condition of the Negroes in the State of Texas’: W.E.B. Du Bois’ 1935 Speech at Prairie View State College” (2017). Northwestern University Press will publish his next book, Citizen of the World: The Late Career and Legacy of W.E.B. Du Bois (2019). philliplukesinitiere@gmail.com

Sandra Staton-Taiwo earned a doctorate in African American literature from Howard University in 2001. She has taught at several colleges, including Penn State York and Gettysburg College, and is presently a faculty member at Alabama State University. She has taught courses in English Composition, Black American Literature, poetry, the Harlem Renaissance, Black Aesthetics, African American Studies, and a seminar on W.E.B. Du Bois. Publications include essays about faculty of color, W.E.B. Du Bois’s literature, and Langston Hughes’s poetry. Her book Broad Sympathies in a Narrow World: The Legacy of W.E.B. Du Bois (Broadside Lotus Press, 2018) is a collection of poems that reflects her exploration of and engagement with Du Bois’s personal and political lives. drstatontaiwo@gmail.com

Jarvis Tyner is former executive vice chair of the Communist Party USA (CPUSA) and a long-time member of the party’s national board. He was a founding member of the Black Radical Congress and served on its national coordinating committee. Tyner joined the CPUSA at the age of 20. After several years working in various industrial jobs in the Philadelphia area, where he was a member of the Amalgamated Lithographers and the Teamsters union, in 1967 he moved to New York to chair the W.E.B. DuBois Clubs of America. He was also founding chair of the Young Workers Liberation League. He was the CPUSA candidate for vice president of the U.S. in 1972 and 1976, running with party leader Gus Hall. Tyner is a longtime spokesperson against racism, imperialism, and war. The author of numerous articles and pamphlets, he has appeared in many public venues advocating for peace, equality and the socialist alternative.  jtyner@cpusa.org

Alys Eve Weinbaum is Professor of English at the University of Washington, Seattle. She teaches feminist studies, black studies, Marxist theory, and transatlantic literature and culture. She is the author of The Afterlife of Reproductive Slavery: Biocapitalism and Black Feminism’s Philosophy of History (2019) and Wayward Reproductions: Genealogies of Race and Nation in Transatlantic Modern Thought (2004). She is coauthor (with the Modern Girl Around the World Research Group) of The Modern Girl around the World: Consumption, Modernity, and Globalization (2008) and a coeditor (with Susan Gillman) of Next to the Color Line: Gender, Sexuality, and W.E.B. Du Bois (2007). She is currently at work on two projects. One focuses on dystopian literary and filmic representation as historiography. The second expands on her ongoing study of the relationships among slave racial capitalism, biocapitalism and social reproduction. alysw@uw.edu 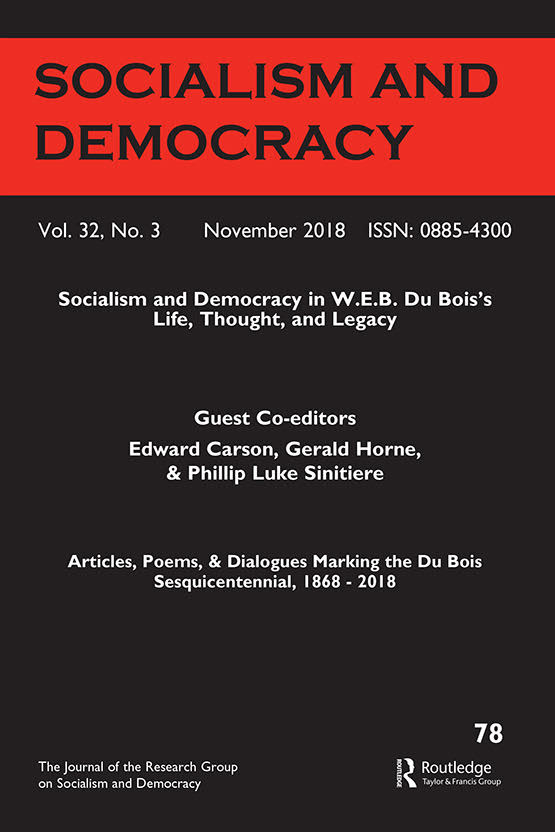