Hip-hop was born into death, mayhem, and violence.  Hip-hop was the movement that rose from the ashes of the Civil Rights/Black Power movement’s flameout.

I am very much like a lot of heads in the hip-hop generation: I am not going to smile, shuffle, or give a good goddamn what anyone thinks about me, and that most assuredly inludes White folks.

…I say what I feel, when I feel it, and exactly how I feel it.  This, too, is how Tupac Shakur rolled.  As did Ice Cube, Chuck D., and other voices of hip-hop before ‘Pac.  And others after Tupac.  I have no doubt that the outspokenness—be it political or apolitical—that is so discernible in hip-hop today is the residual effect of the bluntness of the latter part of the Civil Rights Movement.

This is why I declare, nonstop, and mad loud so you old Negro leaders, deficient in the art of listening, can hear me: Tupac Shakur dead is more relevant to poor and struggling young Black people in America than a Jesse Jackson or an Al Sharpton alive.  The perception is the reality:  There ain’t no national agenda for Black folks and ain’t nobody really been trying to create one for the past thirty years and Black America ain’t as dumb as you all think we are as you all dart from one TV camera and one photo opportunity to the next.  This much we know:  From the beauty of the freedom movement, then, we have a big, Black nothing, today.

…Hip-hop is a reaction to institutionalized White racism, American classism, the material, spiritual, and psychological failures of the Civil Rights Movement, the United States government’s abandonment of its war on poverty, the horrendous lack of vision and incompetence of “traditional” Black leadership,… and the grossly stark belief that if the poor African Americans, West Indians, and Puerto Ricans who spawned hip-hop did not create something to preoccupy themselves, to give them an option other than death, to give them a voice, some visibility, a space to breathe, they would surely die. […]

…When I encounter older Black men…, I wonder to myself why they survive and what they personally tote with them….  And what of that older Black man who has remained on the front lines of what we term “the struggle,”… who instinctually refers to White people, underneath his breath and when among like-minded peers, as “crackers” or “devils,” who mocks the police as “pigs,”and who is so out of touch with the hip-hop generation, including his own children, that he thinks these children and their culture an aberration, their culture, their music, completely without soul, artless, chaotic, noisy, foul, despicable, ruthless, ugly?  Why does he not take into account how completely without soul, artless, chaotic, noisy, foul, despicable, ruthless, and ugly the conditions were that created and help to perpetuate the music and culture of his children?  Or does he even care?…

And what of any of these types of Black men… who are in such a state of arrested development that they cannot even begin to comprehend and appreciate and learn from the herstories told by their female peers with names like bell hooks, Angela Davis, Kathleen Cleaver, Alice Walker, Toni Morrison, Ntozake Shange, Sonia Sanchez, Toni Cade Bambara, Audre Lorde, and many, many other sisters?  Black men who feel any talk of the rights of Black women is an attack on Black men, on their manhood, or, some state defiantly, a clear-cut collusion with the White man, even as these Black men ignore the fact that some of them have raped Black women, manipulated Black women, beaten Black women, killed, in some form or another, Black women, all under the guise of maintaining some twisted notion of their power, rank, and authority in our communities.  This was the spectrum of flawed manhood that the hip-hop generation was met with at its inception.

*Excerpted from pp. 96-109 of Who’s Gonna Take the Weight? Manhood, Race, and Power in America (New York: Three Rivers Press, 2003), by permission of the author and the publishers; from selections made by Cherise Davis (whose review of Powell’s book appears elsewhere in this issue). 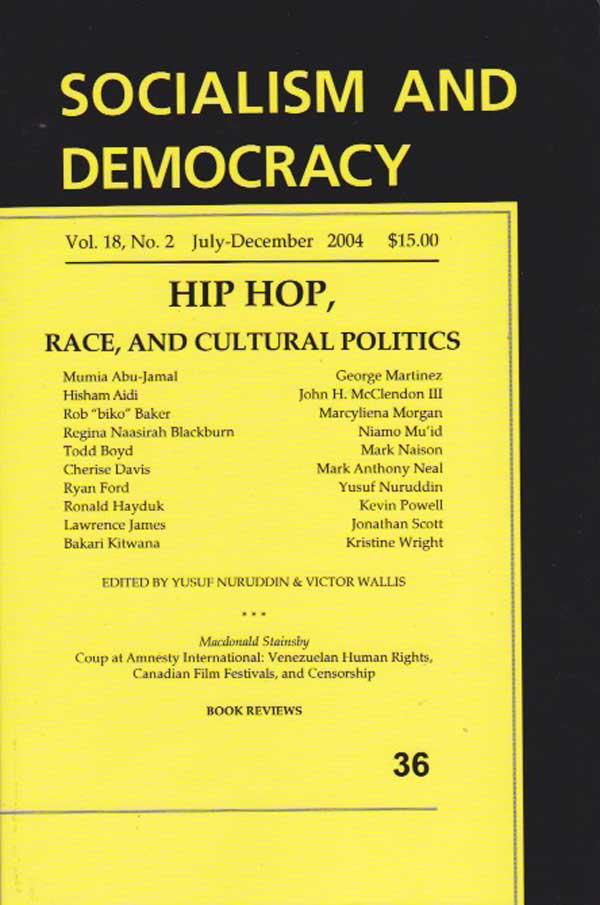