Sam Anderson, Education Director at the Center for Law & Social Justice of Medgar Evers College (CUNY), is the author of The Black Holocaust for Beginners. He co-edited In Defense of Mumia and the forthcoming Reparations Reader. He is active in the Black Radical Congress, the Reparations Mobilization Coalition, and the Global Afrikan Congress.

Regina Naasirah Blackburn is an independent scholar with research interests in African American literature. She holds a Ph.D. in American Studies from the University of New Mexico. Her focus on August Wilson developed while she was teaching at Seton Hall University.

Rose M. Brewer teaches in the Department of African American & African Studies at the University of Minnesota-Twin Cities. She is also a member of the National Council of the Black Radical Congress and a board member of Project South: Institute for the Elimination of Poverty and Genocide.

Melanie E. L. Bush, a longtime activist for social justice, recently completed her Ph.D. in Anthropology at the City University of New York and is currently employed at Brooklyn College (CUNY). She is the author of Breaking the Code of Good Intentions: Everyday Forms of Whiteness (forthcoming).

Rod Bush is an assistant professor of sociology at St. John's University. He is a recent Ph.D. after many years in the movement for social change and Black liberation. He is the author of We Are Not What We Seem: Black Nationalism and Class Struggle in the American Century, and he edited The New Black Vote: Politics and Power in Four American Cities.

Ward Churchill (Keetoowah Band Cherokee) is Professor of American Indian Studies and Chair of the Department of Ethnic Studies at the University of Colorado/Boulder. His most recent book is Perversions of Justice: Indigenous Peoples and Angloamerican Law.

Steve Early is a Boston-based national staffer for the Communications Workers of America; he has also worked for the United Mine Workers. He has written about workplace issues for Labor Notes, the Boston Globe, the Los Angeles Times, The Nation, In These Times, New Politics, The Progressive, and New Labor Forum.

Bob Feldman is a Boston-area activist who has worked on censorship and tenants' rights issues, and in support of political prisoners. His articles on racism and military complicity in academe, the media, and the foundation world have appeared in Dollars & Sense, Toward Freedom, Downtown, and Aquarian Weekly.

Richard Flood is an Ironworker (Local #1, Chicago), a community organizer, and a paralegal who recently received a politically motivated ten-year prison sentence for "Aggravated Battery" for an incident in which he rescued his wife from three assailants. Correspondence to him may be addressed c/o the S&D editorial office.

Eric Foner is the DeWitt Clinton Professor of History at Columbia University. His books include Politics and Ideology in the Age of the Civil War; Reconstruction; and The Story of American Freedom.

Salah D. Hassan is an assistant professor of English at Michigan State University. He is associate editor of CR: The New Centennial Review and an editorial committee member of Middle East Report.

Ronald Hayduk, a co-editor of this issue, teaches political science at the Borough of Manhattan Community College (CUNY). He co-edited Democracy's Moment and From ACTUP to the WTO; is the author of several book-chapters; and is active in various political struggles.

Gerald Horne is professor of History at the University of North Carolina. His recent books include From the Barrel of a Gun: The United States and the War against Zimbabwe, 1965-1980; Class Struggle in Hollywood, 1930-1950; and [co-edited] W.E.B. Du Bois: An Encyclopedia.

Lynette Jackson is an assistant professor of History and Women's Studies at the University of Illinois at Chicago. A specialist in African history, her interests include gender & sexuality, race, colonialism, nationalism, and the history of medicine.

Fred Jerome is a veteran journalist whose work has appeared in many publications, including Newsweek and the N.Y. Times. He has taught journalism at Columbia and NYU, a course on Einstein at the Brecht Forum, and a course called "Scientists as Rebels" at the New School University. The Einstein File is forthcoming in paperback.

Maulana Karenga is professor of Black Studies at California State University, Long Beach. An activist-scholar, he is chair of The Organization Us and National Association of Kawaida Organizations. His published works include Introduction to Black Studies and Kwanzaa: A Celebration of Family, Community and Culture.

Robin D.G. Kelley teaches history and Africana Studies at New York University. He is the author of Freedom Dreams: The Black Radical Imagination and other books. Among his current projects is a co-authored study of African American history in a global context.

Joel Kovel is the Alger Hiss Professor of Social Studies at Bard College. His books include White Racism: A Psychohistory; Red Hunting in the Promised Land; and The Enemy of Nature. A member of the Green Party, he has twice been a candidate for national office.

Muntu Matsimela is an activist lawyer whose participation in the Black Liberation Movement goes back to the 1960s. He is a founding member of the Reparations Mobilization Coalition and the Global Afrikan Congress. He is also active in the World Social Forum, the New York Social Forum, and the struggle around Pacifica Radio.

Anthony Monteiro is an associate professor of sociology at the University of the Sciences in Philadelphia. His activism goes back to the civil rights and black power movements. He was active in the African liberation and anti-apartheid movements. He has written extensively on Marxism, race, and W.E.B. Du Bois.

Yusuf Nuruddin, who conceived and co-edited this issue, is a veteran activist; professor of African American Studies at the New School; Co-Chair of the Brecht Forum; a radio & tv broadcaster; and a product of Bed-Stuy, Harvard & Yale. His writing, an unholy mix of scholarship, underground journalism & satire, appears in several venues.

William W. Sales, Jr., is Associate Professor and Chair of the Department of African American Studies at Seton Hall University. He is the author of From Civil Rights to Black Liberation: Malcolm X and the Organization of Afro-American Unity , and is a member of the Metro New York Chapter of the Black Radical Congress.

Stephen Steinberg teaches at Queens College and the CUNY Graduate Center. His last book, Turning Back: The Retreat from Racial Justice in American Thought and Policy, received the Oliver Cromwell Cox award for Distinguished Anti-Racist Scholarship. Its second edition includes an epilogue, "Up from Slavery: The Myth of Black Progress."

Victor Wallis, who co-edited this issue, teaches in the General Edu- cation department at the Berklee College of Music. His essays on the recent history of the U.S. Left have appeared in Monthly Review, New Political Science, and Socialism and Democracy, and in the anthology Liberation, Imagination, and the Black Panther Party. 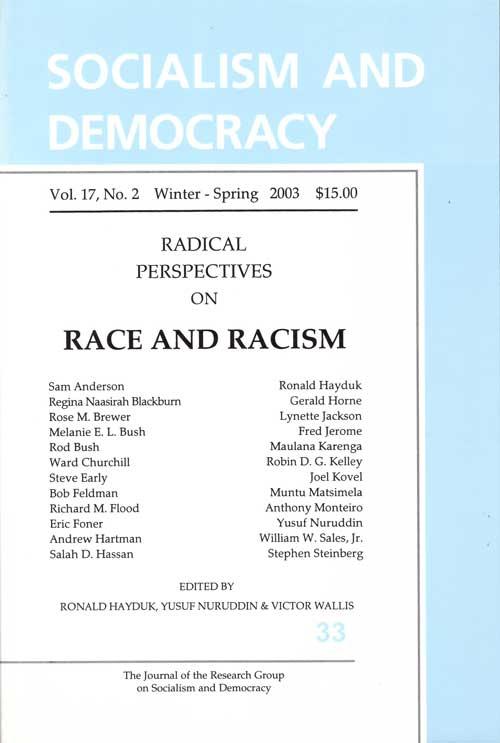